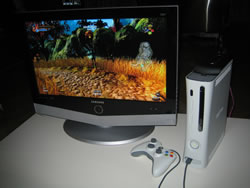 After spending two days playing with the Xbox 360 I decided that I needed to do something special for this week’s show. So I sat down with Nick Puleo from Evil Avatar, John Callaham from Gamecloud, and James Ransom-Wiley from Joystiq to dissect every aspect of the Xbox 360. We talk about the hardware, the interface, every single game at the event, and a lot more for over an hour and a half! It’s like getting two shows in one, check it out. Gaming Steve Episode 23 Program